Building up to race day, I knew the Comrades crowd was going to run. There were several others who were going to run as a team (the Lusaka Running Club team won last year and wanted to repeat). Richard, the guy who is training the Comrades team made sure to tell them all not to race. But my friend Val and I, who are not running Comrades, were free to race. Richard also started insinuating that I was the one to beat in this race. I thought I had a good chance of actually winning it, but only if Richard didn't.

The night before race day came, and I got everything ready. Bottles of water, some frozen, some just cold. Bananas. Oranges. Coke and Mountain Dew. And clothes. Lots of clothes. Three shirts, four pairs of socks, three pairs of shoes, two pairs of shorts, and sweat pants and a hoodie. And my trusty yellow hat.

Friday's weather was perfect running weather. Cool and cloudy. But then, all night long, it rained. It rained hard, keeping me awake a lot of the night. It was still raining when we got to the race. Richard and I got there just after 6 and set up an Easy-Up tent (another friend came and added two more). And it rained.

We got the news that due to some electrical problems, the race (set to start at 7) would start 15 minutes late. Then another 15 minutes. I was freezing cold, as I had headed over to the start line in my shorts and singlet. Then they got the electricity working, having run a cable across the street from the school, and they were ready to start us.

Before we start, I want to back up. This race actually had two races. a 6 hour race and a 3 hour race. The 3 hour race was to be punctuated by people throwing color packets on one another. I'm just not into that and was a little worried that I'd get it all over me and my Lusaka Running Club singlet or that I'd have to go to church with dyed hair. The 3 hour run would be crowds of little kids and teenagers and I wasn't looking forward to that. But it is a school function, first and foremost (ISL is the International School of Lusaka).

So anyway, the start. The race director got us to come up - not too close to the mat so we didn't trigger it early, and said, "Start." I was a little surprised, but off we went.

It was a 1 km loop through a rather narrow trail, which wasn't a problem as the numbers weren't great. Did I mention that it was raining? Hard? So the trail was already muddy. Especially around by our "camp" where there was a sharp switch-back in the mud. It was hard running through the mud, but Val and Rich and I were managing 5:30 or faster for many, many loops. The mud was awful, though, and it was hard to keep your footing. And did I mention that I hate mud? I sure did to everyone around.

Things went really smoothly for a long time. The race crew started throwing bundles of tall (cut) grass on the really bad muddy areas, and that helped a lot. Still it rained on, and the path was a mud bog. Mud was everywhere. Twice I had to stop and scrape mud out of the insole of my shoes. It was even hard to untie my shoes because the mud was so thick on the laces.

As we ran, I got the feeling I was in the top 3 - there was one guy who was unaccounted for (JoJo) and Rich, Val, and I stayed up there.

It continued to rain. Soon one of the RDs came and announced that the 3 hour run was cancelled, but we could keep going if we wanted. Then I overheard her telling the other RD "It doesn't seem like any of them want to quit." I was glad that they didn't pull the plug on our race. I think we would have continued it anyway unless we got kicked off the course.

Around 40 km, I had a sudden twinge in my upper groin muscle, so bad I had to walk/limp most of a loop. I decided I was done. It was a tough decision, but I figured there was no reason to hurt myself worse. DNF is better than injury.

I sat down, stretched it out a little, then decided I might as well see if I could walk it out. That felt fine, so after almost another loop, I continued running. I never felt it again the whole run.

Another factor that came into play about 30 km was my watch. My Garmin (GPS watch) has been losing charge, so much that I have stopped using it. But at the last moment, a friend who wasn't able to run lent me hers. So I was running with it, keeping track of my pace and my distance, but then it just shut off. So I went back to my Timex. Unfortunately that led me to lose count of laps. I thought I was 1/2 lap ahead of Richard (so did he) but I was really behind him.

At about 40 km I stopped to change shoes. My feet were really hurting and my shoes were so muddy, so I switched from my old Kinvaras to my Asics GelLyte 33s. Good move. It was like I got new legs and new feet.

The rain stopped, and it got windy, which was nice because it dried some of the course a little. But it was cold. I found the driest line, usually right along the edge of the trail, getting in the weeds a bit, but footing there was better. Otherwise it was slippery and mushy. I had a couple of loops where I ran with a friend and we were unintentionally slopping mud all over each other. Did I mention how I feel about mud?

At one point near the start line I saw a family and their little boy started laughing at how dirty my feet were. I told him "I'll let you in on a secret - this is my second pair."

I decided I would go for 50k. But when I hit 50, I figured I'd keep going. I was amazed how fast the last hour went, me just plodding along. I got my lap count figured out (this is when I figured out I was in second place). Richard was gaining on me, and shouted out, "If you walk a bit, we can walk together." He thought I was still ahead of him, and this was just one of his tricks. Like saying earlier "I'm only doing 40km." "50 is all I've got in the tank today." Yeah, right. But I was glad for the company, especially as I knew he was really ahead of me! 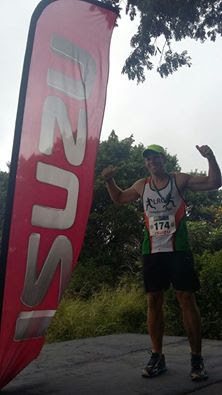 We finished up the last couple of loops - there were 3 minutes left when I crossed the line with 54 laps - not enough time to try for another. As it turned out, Richard's 55 was enough for a course record, while my second place 54 was 6 more than last year's winner.

One cool thing was the support we got. We had a tent with friends in it (and those running the relay, when they weren't running, hung out there). They had music playing (though Kenny Rogers' The Gambler wasn't all that motivating, it was certainly a positive distraction. Though playing it {randomly} when I was considering the DNF was pretty funny) and they had all our dry stuff and our food. So when I'd go by on a lap, I'd just tell them, "Next loop, I want a sandwich" and they'd get out my sandwich box." Or they'd open a Coke for me. Or an orange. It was awesome. It was like a full-service hydration/nutrition station. They even gave stuff to people who weren't in our club.

They had an award ceremony and it was funny listening to some boys who won their age group of the relay. They were amazed as each number of loops was read. They had combined for 61 or so among 4-5 runners. When they heard that we had done 50+ on our own, they were amazed.