Last year I ran the Lafarge Lusaka Marathon pretty much on the spur of the moment. Though I ran a good race (pretty well untrained), the experience itself was terrible. Bad traffic, a difficult course with no signage, and an awful finishing experience made me vow to never run this race again.

However, as this year's race came near, members of the Lafarge team approached us runners to ask our opinions on the race and what improvements we would like to see. I was very frank with them and even shared my race report from last year (which ended with "I will never run this race again.")

Because of the efforts they seemed to be taking, we as a group decided we would run this race again. Give them one more chance.

The Sunday before the race, a group of us went to survey the new race course. It was a good course, mostly flat, with a couple short hills and a couple long gradual hills. The shake-out half marathon was great, giving me a lot of confidence going in to the race. Before the shake out, I was still up in the air as to whether I would "run" it or "race" it. After the 1:44 half marathon on Sunday, I figured it was "race."

Saturday morning came early - I woke up before my alarm (this usually happens when I have to get up super early). I had gotten everything ready in advance, so I was up and ready to go. I got a call to pick up one of the runners on the way, which was no problem. We got to Levy Junction to find tents and a stage built in front of the mall this year - a good change to start with, as last year we had to go around to the back after finishing.

I got everything ready, no problem, except that as I was stashing my car key I dropped it... down in the back of the spare tire! I tried and tried to get it out, to no avail. I scraped up my arm trying to get it. I borrowed someone's stick and flag and couldn't get it. Finally the runner who I had given a ride to get there was able to help me (his arm is skinnier than mine). By this time they were assembling the runners to the start line. In the chaos, I neglected to re-apply Body Glide. Thankfully, that never came back to bite me, but I was scared when I remembered it.

They did some announcements and stuff - I didn't really pay attention; I was getting into the zone. There were scores of selfies and standing around, then they herded us out to the start line. I dashed behind a tree for a quick bathroom break, then the race was on!

I was carrying my phone for this race - not ideal by any stretch of the imagination, but better than having no distance/timing option. I would have rather had my iPod, but it requires headphones while the phone has speakers. So I had my music going for the whole race. That was a good pick-me-up.

The first half went by pretty quickly and uneventfully. I was pleased at how well they had controlled traffic. I ran with a guy named Ben who was running his first marathon. His friends were working with the organization in some way, so they convinced him to run. The splits went by quickly, all right within the time I was hoping for, and we zoomed through the first loop (half marathon) in 1:41. I was really happy with that time, as it was right where I wanted to be to make a surge for the second half. I was hoping to beat 3:30, with a goal of 3:25. 1:41 put me right there. The first half was great, as there were lots of runners who were doing the half marathon. Now it was on to the lonely second half of the race.

Along Independence Avenue, the traffic was really bad... on the other side of the street. The traffic police had done a good job of shutting our side down. While we were running along, this old bearded guy came running along next to me along the median, calling out "Zambia wins!" over and over again as he ran next to me. I stopped and gave him a handful of gummies, as he had been running along with me for about 1/2 km. Plus, the gummies were weighing my shorts down. They kept sliding, especially as I got sweatier and sweatier.

About 25 km in (15 1/2 miles or so) I started to fade a little. The heat was getting to me (it got up to 86*F) and I was really looking forward to the Mountain Dew and the peanut butter sandwich I had prepared. My friend was planning to deliver them to me at about 30 km (around 19 miles). I figured I would gut it out until then. But 30 km came and went and no friend... when I sent a text, I found that they got stuck in traffic and wouldn't be coming. This made things physically difficult, as I needed the extra kick from the peanut butter and the Mountain Dew, but it was also mentally taxing as I was counting on it and looking forward to it.

That was the beginning of the end, as I let myself walk once or twice or three times or four. I don't even want to report this part of the run. I did decide to ditch the rest of the gummies after they melted in my pocket. I tried to eat one but it tasted like sweaty sugar and chemicals. So I threw them in the ditch. At least my shorts wouldn't fall down anymore!

The voice on my phone kept telling me the time and the distance and the time per kilometer, and the hope for 3:30 died pretty quickly. As did the hope for beating last year's time. My friend Richard caught up with me (the only one who beat me at the ISL Ultra 6 hour run) and asked if I needed some drugs. I gladly took some (ibuprofen). I was in pain by that point. He also gave me some glucose to eat which perked me up a little. Our friend Sarah also caught up to me and pulled me along. The glucose had me perked up enough that I was managing to run again, maybe plod would be a better word. We rounded the loop around Levy Junction and finished! The best moment was, as we rounded the last corner headed for the finish line, Ted Nugent's "Homebound" came on. I got goosebumps and maybe teared up a little.

But as we were finishing, I saw a sheet of corrugated metal from a nearby worksite sitting right in our path. Sarah went one way and I went the other way around it... except that some moronic workers decided to try to pick it up and move it, right as we were heading that way! I yelled at them, really loud. Probably incoherently. And barely managed to miss them.

We crossed the finish line, right over 4 hours, and as I crossed, my legs just went out from under me. It felt like they just turned into jello. Thankfully, there were plenty of people around to help me to my feet and to get me to the medical tent where I got some nasty stuff to drink and some ice to put on my legs and back and neck.

I was very disappointed in my race, especially as I was hoping to run sub 3:30 and ended up at 4:02. I went through a lot of emotions on the race. 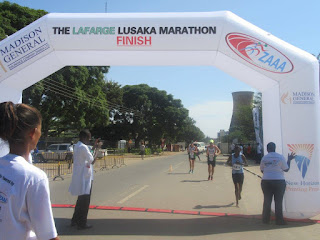 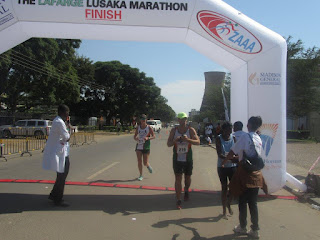 Following the race, they handed out medals (right by the finish - again, a good change!) and a little goodie bag with a sandwich and a bottle of orange juice! The sandwich really was good. Almost as good as the Mountain Dew, which I got shortly!
Posted by Brian Vinson at 8:16 AM

Great recount and congratulations again despite not beating your time! You did great!