Something we've always liked doing is day trips. In Ohio, we tried to find all the historical sites near enough to drive to, especially if there was hiking available.

This week's trip was a day trip to Chaminuka, a game park and lodge near Lusaka. It's only about an hour (+) from our house, and one bonus was that the 20 km of gravel/dirt/rock road from the airport to Chaminuka was largely paved!

We got there around 9:30 which gave us time to explore a little before going on a game drive. We saw giraffe, zebra, eland, bushbuck, impala, ostrich, wildebeest, and elephant. That doesn't include the fenced-in cheetahs, lion, and lynx. 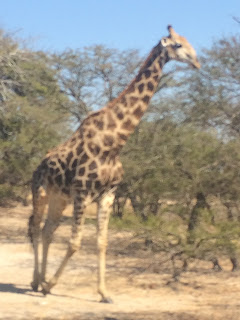 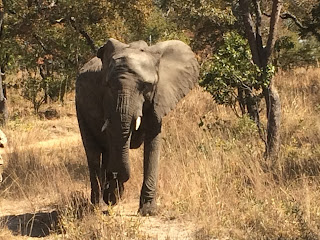 After the game drive, we hung around the lodge for a while. Andrew and I tried to play snooker. I don't understand the game, and the big sign with the rules didn't help a whole lot.

Then we had lunch, a buffet with fresh grilled chicken, beef, pork ribs, and African sausage (as well as a lot of other stuff). Delicious and enough to stuff me.

We played around the pool (the kids got in, but the water was pretty cold), met some members of a mission team from Willow Creek (Chicago) who had been serving in Lusaka, and then we went fishing. Actually, Andrew and I went fishing while the rest of the family went for a boat ride. 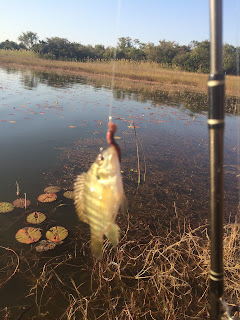 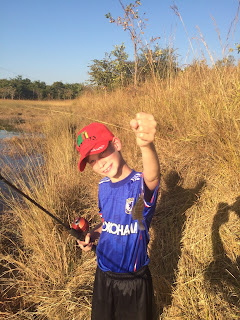 Yeah, our fish weren't very big. But Andrew was pleased as punch to have caught fish (I think we each caught three. Maybe he caught four. None were much bigger than the ones pictured).

It was a really nice day trip, though too expensive to do often. But who else is going out and seeing these kinds of animals close up?
Posted by Brian Vinson at 1:05 PM
Labels: day trip, family